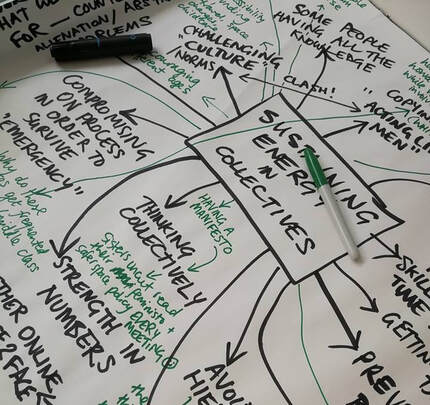 What are Social Centres?
​
Social centres are spaces that are used for people to organise from, helping access affordable meeting space, storage for useful materials, and items, for users’ campaigns and projects that will be a tool in some way to manifest or call for social change or system change.
In each individual space the activities will depend on both the needs of the community in which the social centre is based, and the skills which the participants (users) have to offer. To this extent, they are spaces that are for use for an ‘engaged’, or active, or potentially politically-engaged, people or public (and their allies).
​
Social centres may also be designated "safe-space", or have “safer-spaces policies”, where specific forms of dialogue and activism are encouraged and protected from harassment. This is with the intention to serve as open space for community interaction among widely disparate groups without censorship.


General definition
Social centres provide a place to socialise for a politically active or engaged/interested community, in a venue that would often be also designed to run as similar as possible to a bar, cafe or music venue, either temporarily or almost as often as it is open.
A social centre would generally be run on a voluntary basis by the people involved, who are neither charity workers nor social workers, as this would imply some form of social hierarchy. The projects are instead run in the spirit of co-operation, solidarity and mutual aid.
Social centres differ from ‘community centres’ in that they are run autonomously, usually without assistance from the state (government or council level) and/or corporations. The aims and policies of the centres are determined by those running them.

​
What can you find there?
Social centres tend to be in large buildings and thus can host activist meetings, concerts, bookshops, dance performances and art exhibitions.
They can provide access to alternative - often harder to access - information, through events or smaller spaces within them, such as libraries, info-shops (info-points), film-nights and talks.
Other activities there can include meetings about local or global issues, independently run cafes (or events with food such as ‘people’s kitchens), free shops, computer labs/internet access, graffiti murals, legal collectives (e.g. support for or information about ‘rights’ or campaigns to do with housing) and other info-talks, skill-shares and workshops on a range of topics..
Sometimes social centres can include exhibitions and more formal ‘classes’, these would often be likely to provide support networks for minority groups such as prisoners, refugees and other marginalised people in society.


Political position and philosophy
Whilst every individual case is different, most centres are run on the basis of non-hierarchical consensus decision-making. Most centres lean to the left politically, including anarchist, autonomist, or sometimes libertarian-communist, viewpoints.
Centres tend to adopt an ethical vegan philosophy, whilst accepting that individuals involved may have differing personal lifestyles. Some spaces will accept as food something that is ‘reclaimed’ from waste - not purchased (and so not likely to be contributing to animal-related markets) - but is not vegan, while others will not do so.
​

Social Centres have played a key role in the development of the concept of 'safer spaces' and anti-oppression practices. These intend to create an empowering and supportive environment based on solidarity and respect.

Many social centres have adopted policies and processes which aim to provide a framework for challenging harmful behaviour including physical, sexual and emotional harm, as well as discriminatory and oppressive behaviour or language.

Most polices will define oppressive language and behaviour as that which is racist, sexist, classist, ageist, ableist, homophobic or transphobic - this list is not exhaustive. The Social Centre Network is committed to trans-inclusivity.


“Free expression ends at the point where it becomes an act of oppression to another.” theisland n this North-Western corner of Europe - Wales, Ireland, Scotland, England - social centres are to be found in a variety of squatted, rented, mortgaged and fully owned buildings